admin
From 1990 Album: "Fear Of A Black Planet". Song first appeared on the 1989 Soundtrack: "Do The Right Thing".....Public Enemy Official Site:
http://www.publicenemy.com/

Get Public Enemy's Music:
http://www.amazon.com/Public-Enemy/e/B000APZO1A/ref=ntt_mus_gen_pel&http://itunes.apple.com/WebObjects/MZStore.woa/wa/viewArtist?id=36954Public Enemy, also known as PE, is an influential hip hop group from Long Island, New York, known for its politically charged lyrics and criticism of the American media, with an active interest in the frustrations and concerns of the African American community.

In 2004, Rolling Stone Magazine ranked Public Enemy number forty-four on its list of the Immortals: 100 Greatest Artists of All Time. Acclaimed Music ranks them the 29th most recommended musical act of all time and the highest hip-hop group. The group was inducted into the Long Island Music Hall of Fame in 2007.

Chuck D put out a tape to promote WBAU (the radio station where he was working at the time) and to fend off a local mc who wanted to battle him. He called the tape Public Enemy #1 because he felt like he was being persecuted by people in the local scene.

This was the first reference to the notion of a public enemy inany of Chuck D's songs. The single was created by Chuck D with a contribution by Flavor Flav, though this was before the group Public Enemy was officially assembled.

According to Chuck, The S1W, which stands for Security of the First World, "represents that the black man can be just as intelligentas he is strong. It stands for the fact that we're not third-world people, we're first-world people; we're the original people [of the earth]."

On the track "Louder Than a Bomb" from It Takes a Nation of Millions to Hold Us Back, Chuck D reveals that the D in his nickname stands for Dangerous.

Developing his talents as an MC with Flavor Flav while delivering furniture for his father's business, Chuck D (Carlton Douglas Ridenhour) and Spectrum City, as the group was called, released the record "Check out the Radio," backed by "Lies," a social commentary—both of which would influence RUSH Productions' Run-D.M.C. and Beastie Boys. The group was signed to the still developing Def Jam Recordings record label after co-founder Rick Rubin heard Chuck D freestyling on a demo.

Around 1986, Bill Stephney, the former Program Director at WBAU, was approached by Rubin and offered a position withthe label. Stephney accepted, and his first assignment was to help Rubin sign Chuck D, whose song "Public Enemy Number One" he had heard from Andre "Doctor Dré" Brown. According to the book The History of Rap Music by Cookie Lommel, "Stephney thought it was time to mesh the hard-hitting style of Run DMC with politics that addressed black youth. Chuck recruited Spectrum City, which included Hank Shocklee, his brother Keith Shocklee, and Eric "Vietnam" Sadler, collectively known as the Bomb Squad, to be his production team and added another Spectrum City partner, Professor Griff, to become thegroup's Minister of Information. With the addition of Flavor Flav and another local mobile DJ named Terminator X, the group Public Enemy was born." Public Enemy opened for The Beastie Boys on some of their East Coast concerts, including Philadelphia, Newark and Brooklyn. 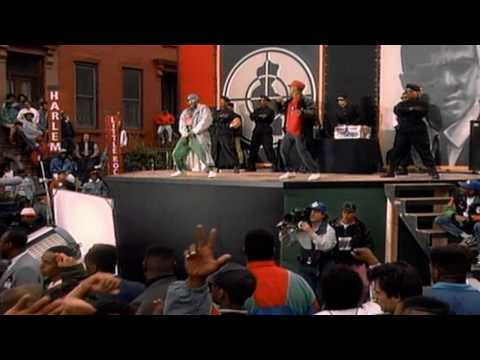